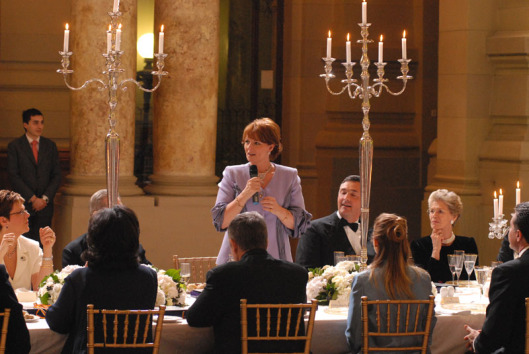 BUCHAREST, Romania, April 15 (UPI) — The honor guard stood in full regalia as King Michael and Queen Anne strode the staircase to their waiting guests. The media in tow, the cameras flashing, Crown Princess Margarita and Prince Radu, who has just announced he is running for president of Romania, followed close behind. I had already entered the imposing hall. Last month, Margarita turned a youthful 60.

Seventy-five selected guests were hosted for a two-and-a-half day soiree. It included royals, nobles and personalities from public life, art and academia. It was a magnificent balance of esprit de corps and jubilation. It was classical music, gala opera and disco. It was, in short, a wonderful tribute to a very worthy lady from her loving husband, family and friends.

History in former communist countries has not been kind to royals and nobles or their families. Restitution has been slow if at all. Jealousy abounds among former apparatchiks. False claims by royal pretenders and their allies — which have been seen in Romania — have complicated matters.

His Majesty King Michael is a widely admired figure. The 85-year-old monarch is the last living royal to have led a country during World War II. He was forced to abdicate by a puppet regime close to the Nazis. However, in his early 20s, showing great courage, the young king returned and helped to topple the Nazis toward the end of the war before being forced out again by the Communists. The king and his family lived in exile in Geneva, Switzerland, until the 1990s.

The royal family was recently restituted the lovely Pelesh Castle in Sinaia, some 100 kilometers from Bucharest, where the king spent much of his youth. Sinaia is strangely where the same Communists who stole his property also went on holiday. Many properties, and the role of the royal family, remain in dispute to this very day.

In the mid-1990s, President Emil Constantinescu helped the royals but had little political clout as an independent. President Ion Iliescu came to the king’s cause late because his party was full of former apparatchiks. A well-known case of a royal pretender has complicated matters in Romania. This same group and others — and they are truly uninformed and just plain wrong — have spread nasty rumors trying to link King Michael and royal family with anti-Semitism. It is utter hogwash.

King Michael has visited Israel and the Yad Vashem Holocaust memorial. He has dedicated himself to helping Jewish families in Romania and elsewhere. As the sixth recipient of the Prague Society and Global Panel’s Hanno R. Ellenbogen Citizenship Award, his majesty passed the financial portion of some $10,000 to Petrisor Ostafie, a young AIDS campaigner with human immunodeficiency virus who has fought bitter prejudice in Romania to muster support for his cause. King Michael has a long history of being down-to-earth, thoughtful, kind and benevolent — traits he and Queen Anne have passed on to Margarita.

On a recent trip with Prince Radu, the crown princess’s consort, to the Marmara Foundation in Istanbul, Turkey, I was struck by how superb a representative Radu is for his beloved Romania. The Marmara Foundation is linked to former Turkish President Suleyman Demirel. It will be hosting the 12th Eurasian Economic Summit from May 6 to 8. The primary focus will be energy security. Already the likes of Germany’s Kurt Bodewig, Morocco’s Hassan Abouyoub, the United Kingdom’s Lord Pearson of Rannoch and a host of presidents and prime ministers have confirmed attendance.

During a private dinner in Istanbul, Radu and I were able to talk about Romania’s future — a conversation that continued on this occasion in Bucharest. We spoke long about how to fight corruption in the country. We spoke about the United States’ relationship with Russia. We covered the Nabucco and Blue Stream pipeline projects. As a country that sits on the Black Sea, Romania is an indispensable partner for energy-security issues.

The Princess Margarita of Romania Foundation has raised more than $6.7 million in support of the poor and downtrodden, the young, education, community development, civic society and people with HIV in a country where having HIV is tantamount to being a leper. Princess Margarita has great passion for her country, a country she was only allowed to embrace later in life. Her university mates from Edinburgh, Scotland, were unanimous in their praise of Margarita and the royal family for their long support of Romania — even whilst she was impoverished and in exile.

The royal family’s story is one from riches to rags to some riches. In some ways, it is like a fairy tale. But the disenfranchisement was particularly hard and painful. Without friends, many of whom attended the jubilee, the royal family’s exile would have been exceptionally difficult. King Michael supported his family by becoming a pilot and mechanic. Even at 85, he loves to drive his car.

As the jubilee weekend came to an end, I spoke briefly with the gritty Queen Anne.

She is very proud of her daughter’s achievements and thoughtful about Romania’s future.

A future in which the royal family has a rightful place.