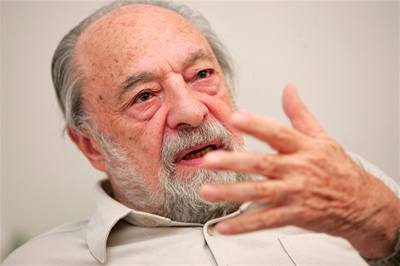 Auerbach came back to Prague after 1989 to reclaim his family’s properties. “They will not take them from us again,” he said. He was already semi-retired and in his late 60s upon his return.

Norbert worked his way up from the mail room, becoming president of United Artists and later of United International Pictures — of James Bond fame. He counted the likes of Sumner Redstone, Sean Connery and Roger Moore as his friends. “Come over for a tea,” he once said to me some years ago. There in his sitting room was Bruce Willis. And for Norbert, that was normal and nothing special.

A World War II Veteran for his beloved America, Auerbach was stationed in France. “I love woman, especially French woman. But they also made me poor,” he once jested. He was married four times, and still managed to keep a small fortune — much of which he used to help young filmmakers at the start of their careers. Most of his life Auerbach jaunted between LA, New York, Paris, Cannes and Vienna. He was, like me, a modern day nomad.

Pictures of the good and famous hung on his office wall. His favorite was one with Sofia Loren, but he had to admit once that it was a close call between that and the one with him and Catherine Deneuve. Despite all these trappings, Norbert was most comfortable in his Navy baseball cap. He was unassumingly down to earth.

But, oh, if you crossed his path — or were unpunctual — the wrath of god came your way. “You are late. You are always late. You will die late,” the hyper-punctual Auerbach would say to me. Just a wee bit miffed, he would get up to leave. “Call me when you can be on time.” I would simply sit gob smacked. Of course he was right.

“The film industry is not for the faint of heart,” he said to me over dinner two years ago. He was still wining and dining the best. He was still being a role model for young filmmakers. He had a special place for Pisek Film Academy — set up by a close colleague of Milos Forman.

Norbert did not like my way of living. “You travel too much. You do too many things. You are like a bouncing bee. You need to settle down,” he would say to me, and then add, “No chance you will ever slow down and be in one place. Just promise me you will stop smoking.” I would smile, demur and take a puff of my cigarette.

I most liked Norbert’s toughness. He would have been a great command sergeant major. He was a great teacher and father figure. He often called me aside to browbeat me — ever so politely and eloquently — about some issue in my column he disagreed with, or to talk about U.S. politics. “You are joining the wrong political party, Marc. … In fact, stay out of politics all together,” he was fond of saying. Only to add, “What am I saying. You could never leave politics, or journalism, or academia. Marc, just get me a drink.”

Norbert loved life. Well into his 80s, he was still fit as a fiddle. It was only in the last years that he sensed his body waning. He began to withdraw from the hustle and bustle that marked his life. He especially missed being on the golf course. But even while his body abandoned him, Norbert Auerbach’s mind was a live wire, calculating and never to be underestimated — waiting for next target, victim or as often, a benefactor of his enormous generosity.

Auerbach didn’t like the Communists much — any wonder? But he felt, like Mr. Justice Cepl and Ambassador Vladimir Lomeiko (read “Cold War milestones,” Dec. 7, 2009), who have also recently passed, that it was necessary to find a balance in the new democracies — even if it meant some of the Communists went unpunished and stayed in leadership positions. It is one of the ongoing debates that marked Auerbach’s and my discourse over nearly 20 years.

Barbara Day (“The Velvet Philosophers”), the grand dame of the anti-Communist underground, reminded me some days ago that I had turned to her two months ago and said I thought Norbert was dying. He had been ignoring my phone calls. “Call him again,” she said. I did.

“You must remember me as I lived, not as I died.”

A lion in winter is gone. But his deep caring soul lives on.

(UPI International Columnist Marc S. Ellenbogen is chairman of the Berlin, Copenhagen and Sydney-based Global Panel Foundation and president of the Prague Society. He has advised political personalities and is a founding trustee of the Democratic Expat Leadership Council.)