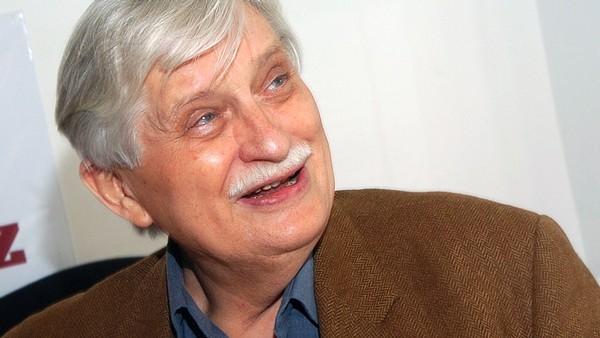 I am saddened that I cannot tell you this in person.

We had talked prior to my leaving on my jaunt in December 2010. We expected you to leave the hospital – weakened but still with us. Alas, cancer has taken you at 73.

I know you will read this from the pearly gates above.

We are hosting the 10th Hanno R. Ellenbogen Award in Prague Jan 25th at the Polish Embassy. This year your friend Adam Michnik is the recipient. He is in good company after Vladimir Ashkenazy and the Conducting Corps of the Czech Philharmonic; Madeleine Albright; Vaclav Havel; Lord Robertson; Milos Forman; King Michael of Romania; Aleksandr Milinkevich; Desmond Mullan; the Dalai Lama. We had hoped you would play a role in the ceremony. We have asked your son Jiri, and of course your ever loyal wife Jirina to join us.

You shone at many of our conferences and public policy dinners. In February we will be hosting Czech Transport Minister Vit Barta in Prague at a public policy dinner, and we have asked to do the same for March in Berlin with the German Interior Minister Thomas de Maiziere. (I met de Maiziere on a panel in Krynica, Poland last year. It was on security – alas, one of my special topics).

Dienstbier – that is how those closest to you lovingly referred to you – we met so many years ago, during the hideous days of Communism. You were a genuine hero and real star of the movement. I was but a bit player in those days.

When I saw you cutting the “iron curtain” with our friends then German Foreign Minister Hans-Dietrich Genscher and Austrian Foreign Minister Alois Mock – I had – like millions of others – tears in my eyes. The decades of your impassioned work, imprisonment, harassment and abuse were now over.

You became the first Foreign Minister of post-Communist Czechoslovakia in 1989.

I remember the first meetings with you and President-to-be Vaclav Havel. You were both genuine, caring, passionate – shell-shocked at the awesome responsibility coming your way. We smoked like idiots. Havel would stop after his lung operation, but you and I continued to enjoy a good stiff drink with your darn-strong red Marlboros.

We had deep passionate discussions about post-Communist Czech Republic. My rantings about the aparatchiks and their corrupt and powerful offspring were not always to your liking. “I am a former Communist,” you would say. “Yes,” I retorted, “a reform Communist – and for it you spent 3 years in jail.” “Are you mad comparing yourself to that slime?” Dienstbier would simply sigh and inhale.

We often disagreed on political issues. We would sit in your flat jabbering away as your wife Jirina would politely excuse herself knowing we would blather for hours. She was to the end your most loyal friend and chief advisor. You were to the left of me politically. You often did not like my strong stance on defense and security. “Marc, Marc,” you would say, “we can solve most of these problems through diplomacy.” Well, Jiri, I still believe in Roosevelt’s mantra, “walk quietly but carry a big stick.” Sometimes one must use the stick.

From Central Europe to Asia to the Middle East, you played a preeminent role in shaping post-Communist foreign policy in a democratic Czechoslovakia between 1989 and 1993 When Czech and Slovakia separated as states, you played a leading role as a commentator and thoughtful rebel, and finally you entered politics again in the 21st century as a Senator and Chair of the Senate Foreign Relations Committee.

In fact, you never really left politics. You chaired the Czech Council on Foreign Relations and people knew to fear your quick-tongued thrashings in person and in columns. Sometimes, you would simply talk and talk, ramble and ramble, beating your opponents by wearing them down.

You were with us on so many occasions from Prague to Berlin to Bratislava to Vienna. When you joined Global Panel, the Prague Society and the American Foreign Policy Council at the Washington Transatlantic Drift Debates in 2004 at the US Congress, you were brutal in your critique of Bush’s foreign policy. Even those who disagreed with you were often taken by your passion.

You were last our guest at Princess Lobkowicz’s residence last year. I was at the US elections getting creamed. We talked by phone later.

I remember our walks across M Street to Georgetown. You liked to philosophize and enjoy the sites and sounds of nature. Especially those of a female nature.

Once – you loved beautiful young women – especially Czech ones – a lovely lady approached on a bike. Screeching to halt, she gasped “My God, it’s Jiri Dienstbier.” You proceeded to speak to her in Czech, laughing and being jovial like a grandfather – that marvelous elder statesman twinkle in your eyes. She was an exchange student at Georgetown and could have talked to you for hours.

Dienstbier, you were sometimes laconic. Mostly, you were a genuinely nice guy, and throngs adored you for it. You were a wonderful mentor. Former Canadian Foreign Minister Barbara McDougall and I talked just a few days ago. She sends her regards and friendship.

For now, all of us salute and bid you a pained farewell.

I know we will meet again – when it is my turn at those heavenly gates.

And Dienstbier, please wait for me with a cigarette and scotch in hand.

(International Syndicated Columnist Marc S. Ellenbogen is chairman of the Berlin, Copenhagen and Sydney-based Global Panel Foundation and president of the Prague Society.  An advisor to governments and political personalities, he is member of the Editorial Board of the Journal of Entrepreneurial Finance.)