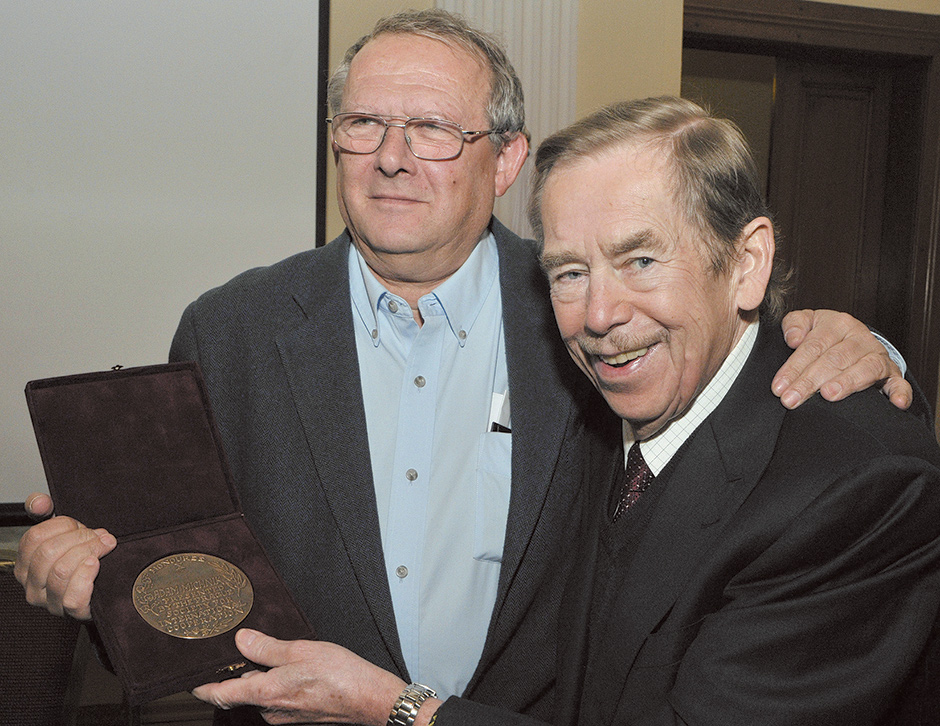 Prague, Czech Republic, May 23, 2010 – The files in his office are piled high, strewn about in a professorial but orderly way. On his wall at Warsaw-based Gazeta Wyborcza – created by Michnik in 1989 to be a national daily and the voice of the dissident movements democratic principles – awards hang crooked, but impressive – a testament to his fight against Communism. From here, Adam Michnik manages Poland’s leading serious daily as Editor-in-Chief.

Stalked, harassed, fired without reason – a Marxist turned dissident – Adam Michnik played a key role in Poland’s move from Communism to democracy. Mostly though for me, Adam is a friend and “weggefaehrte” – though infinitely more important – from the anti-Communist underground days. I have known of him for many years; we have been friends for ten.

“Marc, you have lost a lot of weight,” he says to me. “Wait, wait, don’t start – I must get someone to translate. Michnik speaks fluent French and Russian, in addition to his native Polish. His command of English is good, but he always prefers someone present. “Every word matters,” he comments, a twinkle in his eye. He rummages about looking for a lighter. “That is better.” He smiles as he inhales and takes a seat next to me along with a colleague.

“How is Havel’s health,” he asks me. Vaclav Havel, the former dissident and President of democratic Czechoslovakia and later the Czech Republic, is a dear old friend. I tell him that we had to cancel a trip to Tbilisi in Georgia because of his health. Michnik grimaces and sighs, showing great concern for Havel – who was jailed and harassed during Communist times.

I brief Michnik about the last year and my work on the US campaign trail. Having just returned from Ohio, I talk about the Democratic primary where Secretary of State Jennifer Brunner, a Global Panel Advisory Board Member, has lost to Lt. Governor Lee Fisher. I explain that centrists are generally losing out to more left leaning candidates and that this is not good for the November general election. I am pleased that Congressman Joe Sestak, a former admiral, has defeated long-term former Republican Senator Arlen Spector in the Pennsylvania Democratic primary.

Michnik asks about the Tea Party movement – a group of dissatisfied independents and mostly Republicans – who are shaking up the current US political establishment. They are moving the Republican Party to the right, while the Democratic Party moves to the left. As a Democrat and centrist, I view this as troubling development. I explain that the common thread among the Tea Party members is their objection to big government. In that sense, I agree with them.

Michnik talks about the recent plane crash and death of Polish President Lech Kasczynski. Just weeks earlier, the parliament president Bronisław Komorowski had been selected to run for the ruling PO Party (Civic Platform), defeating Foreign Minister and friend Adam Sikorski in the party’s presidential pre-selection. Before the plane crash, it was generally presumed that Kasczynski would lose the June 20 presidential poll. Now, with his twin-brother and former Prime Minister Jaroslaw taking up the mantle for the PiS (Law and Justice Party), it is unclear how the plane crash will affect the outcome. Even Michnik is unsure though Komorowski is still considered the favorite.

Gazeta Wyborcza recently conducted a survey about the most important election topics. They included accession to the Eurozone, the economy, taxes, pensions and the health care system. Most Poles clearly see themselves in the Eurozone, as do the leading candidates. But there are big differences between rural and suburban areas. The areas closer to the Ukraine are more skeptical of Europe and the West.

Michnik, born in 1946, has a special interest in the Ukraine. His father was First Secretary of the Western-Ukraine Communist Party. He comes from a mixed Jewish/non-Jewish background. He was fired in the late 60’s from Warsaw University when Jewish staff were purged. In the first two years after Communism, Michnik served in the Seijm (Polish Parliament). Michnik – his family background left firmly behind – has political thoughts and roots firmly embedded in civil society.

“You supported Yanukovich over Tymoshenko in the Ukraine presidential poll?” Michnik queries. I explain that the choice was between two revolting candidates. I admit that I am concerned about Yanukovich’s closeness to Russia, but that Julia Tymoshenko – the supposed pro-Western billionaire – would have been no better. She would have simply pretended to be less pro Russian. I do not think it is good to provoke Russia unnecessarily. I am concerned , just as many Poles are, about Russia’s influence in Central and Eastern Europe. Yanukovich is no Kremlin stooge. Michnik remains unconvinced.

It has been just over twenty years since Communism’s fall.

Like our friend Vaclav Havel, Michnik never wavered in fighting for democratic principles.

And like Havel, Adam Michnik remains an indispensable force for democratic change.